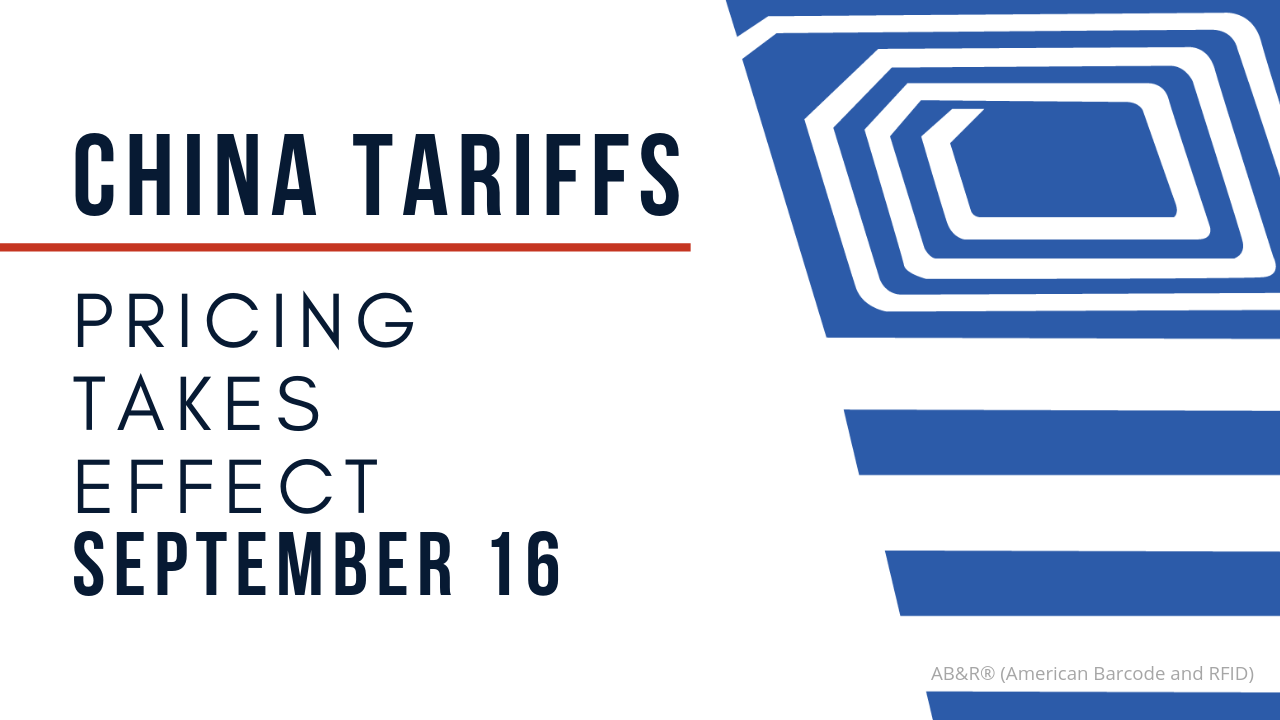 How the Tariffs Impact You

The buzz about tariffs has been building for months – now we finally have answers.  Zebra and Honeywell have both issued statements to their partners about how they will be handling the tariffs. We want you to know what is coming so we can all prepare for impending changes. As of today, this is how the tariffs will impact you.

Dear Partner,
The US Government announced late on Friday, December 13, 2019 that the planned tariffs on Mobile Computers with cellular connectivity are suspended indefinitely. This announcement came after Zebra and our distributors already set in motion the originally planned list price increase of five percent (5%) for yesterday, December 16.
Since these tariffs are suspended, Zebra will now reduce its list prices by five percent (5%)* on the same set of products effective December 23, 2019:
Given the timing of the late announcement on Friday, the list price increases had already gone through the system and became effective December 16 as planned. The next system update is scheduled for Monday, December 23 in which, this new list price reduction of five (5%) will go into effect and offset the price increases being realized this week. We will work with our distributors in their pricing and rebating systems to help ensure that all impacted net prices for partners and customers on price concessions, deal registration and sales at standard discounts will remain unchanged.

Zebra continues to closely monitor government policy as it relates to tariffs with China. As you know, the products impacted, and the tariff percentages mandated are fluid based on government and trade implications. Zebra employees at all levels, and across all organizations, including our Executive Leadership team continue to work hard to minimize the impact for you and your customers.

Although current U.S. tariffs rates are as high as 30% on various goods imported from China, Zebra list price increases resulting from these tariffs remain significantly lower. As an added benefit, and, to provide consistency and predictability in our pricing, we continue to honor all previously approved price concessions and have avoided additional surcharges or fees on our products.

Recently, the U.S. Government announced that tariffs on Mobile Computers with cellular connectivity will be delayed. Therefore, the 5% list price increase on the following Zebra products will be delayed until December 16, 2019:

The remaining list price increases announced on August 2, 2019 are still scheduled to take effect on September 16, 2019:

Zebra continues to closely monitor government policy as it relates to tariffs with China. In the most recent announcement, the United States government imposed new tariffs on certain goods imported from China that are either sold or shipped to the U.S. These tariffs will be ten percent (10%) commencing on September 1, 2019. As a result, Zebra will raise prices on the following products effective September 16, 2019:

Over the last 12 months, the United States has experienced a tumultuous trade climate, specifically with products manufactured in China. Recognizing this, Honeywell took immediate actions to optimize our supply chain and relocate outside of China.

Given these proactive steps, we are pleased to announce that Honeywell WILL NOT be making any changes to the list price of our products as a result of the recent List 4 imposed tariffs announced by the USTR.

At a time when many other industry players are raising prices by as much as 10%, Honeywell is maintaining current pricing for our valued channel partners, enabling you to:

As a reminder, Honeywell has transitioned manufacturing from China to Mexico for a large number of products. Products manufactured in Mexico are denoted with an “N” in the part number. These products are identical to “the non-N” versions in all aspects including specifications and performance. The only difference is the manufacturing location.

Sorry, the comment form is closed at this time.

Our clients speak for us…

We are a long time user of a lot of your products.  Recently our current label printer died and we were in dire need of a new one asap.  Without this printer our manufacturing facility is at a standstill since production labels are needed on everything we ship out along with barcodes.  We were able to get a new TSC label printer shipped to us asap and was able to get back on track without a hiccup in production. I can go on, on how AB&R has impacted our company on a day to day basis, from our Motorola barcode scanner, TSC label machine and numerous rushes we have needed on ribbons/labels.  AB&R has always came through for us.  Thanks AB&R...for helping Universal Metal Inc. run more efficiently.

We do not get a whole lot from you guys, but we do have a standing order for the zebra labels, we get in a shipment the first of every month, I like how you guys send me a notice when product is shipped and  a notice when it is signed for and delivered, I also like how my rep will check in with me and make sure we are doing alright and if we need anything or things that are going on. I just like the personal touch and I think we have a good relationship with the two companies and we are happy and the labels are good quality and are better than the ones we used before, had problems with them.

The AB&R solution gives us tracking, but it’s hands-off as well. There’s no impact on employee processes whatsoever.

The tracking system installation from AB&R was fast, efficient, and accurate. What previously was a four week manual process for validating our asset inventory is now completed in 3 days.